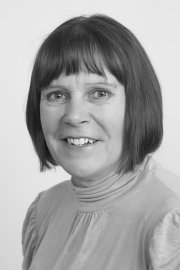 Favourite film: Anything with a musical number. In fact the more musical the better

Favourite food: Roast dinner, followed by a fruit based dessert

Most interesting fact: Attended the opening of the first Severn Bridge- along with the Queen no less!

Frances grew up in Thornbury, South Gloucestershire as one of eight children (including 2 sets of twins - imagine those grocery bills!) attending The Castle School, and finishing her education at Filton Tech College, graduating as a fully qualified secretary. She then worked both in the private and public sectors in secretarial roles, and therefore bought along a wealth of experience when she joined Team RH back in 2005. Ever since then Frances has been a secretarial - dynamo (along with Alison, her counterpart) and has some of the fastest typing-fingers in the West (west- see what we did there?!). Her knowledge of the business and all things ad-ministerial know no bounds; there is nothing our Frances cannot do, and we would all be lost without her. Outside of work, Frances loves to spend time with her family, which now includes her grandson, as well as socialising with friends, jogging, line-dancing and going to the gym.